The Mummy's Mask product line contains the fourth Base Set, 6 Adventure Decks, and a Character Add-On Deck. Only the Base Set is needed to start playing Mummy's Mask with 1-4 players.

"Osirion, the land of Pharaohs, is home to ancient cultures and creatures seen nowhere else. The power of the elements is strong in this land as is that of the Osirion Gods. Adventurers from all across Golarion brave the burning sun to uncover riches of a lost history buried in the tombs of generations past. Dark secrets lie here, and the soul of a forgotten pharaoh has risen to begin a new kingdom ruled by the undead." 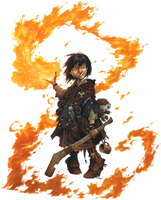 Mavaro
Add a photo to this gallery

While The Half-Dead City is contained within the Base Set, its 110 cards are listed in their own article, not here.

Retrieved from "https://pacg.fandom.com/wiki/Mummy%27s_Mask?oldid=12874"
Community content is available under CC-BY-SA unless otherwise noted.